We decided to sleep in. After our butt-kicking at White Sands followed immediately by two mornings of getting up insanely early and racing off to our locations, only to go on demanding hikes with photography gear, we needed the rest. We’re scheduled to stay two days in Monument Valley, so we decided there’s no real rush. We don’t need to burn out this early in the trip!

We left Moore’s RV Park at 11:00 a.m., right at the mandatory check-out time. I had wanted to be gone by 10:00 a.m., but it took an eternity to fill the fresh water tank, and we decided to wait on it, since we’ve become accustomed to being able to use the bathroom, wash our hands, etc. while we’re driving.

We absolutely loved New Mexico! The sites we stopped at were stunning, and the people were so nice! When we went to Tent Rocks, almost everyone on the trail said hello to us. We stopped at a gas station once, and a guy started talking to us as if he knew us.

That being said, when we crossed into Arizona around lunch time, we were so relieved to escape the New Mexican Roads! I had driven up to that point, and we switched at a gas station. As I eyed our route, it occurred to me that we were extremely close to where Colorado, New Mexico, Utah, and Arizona meet. Originally, we chose forty-three stops for this trip. Upon realizing that it was impossible to stop at 40+ stops across the continental U.S. in just sixty days, we managed to cut things down to a more manageable (though admittedly still very fast paced!) twenty-seven stops.

One of the things to go was the Four Corners Monument. Imagine my surprise when I plugged it into the GPS and saw that it was only fifteen minutes out of our way! Practically jumping in my seat, I showed the GPS to my partner. She wasn’t quite as excited as I was, but we decided that a quick detour for a picture wouldn’t hurt anything. We’d still get to Monument Valley with plenty of time to explore, and this is supposed to be the adventure of a lifetime. Adventures of a lifetime have room for spontaneity!

The Four Corners Monument is maintained by the Navajo Nation, so one of the first things we saw when will parked was Grandma’s Frybread Shack, which is this adorable little spot that sells Navajo cuisine. I’m game to try just about anything I have never eaten before, so I knew exactly where we were eating lunch!

We stopped by the monument first, and we waited in line as everyone snapped their maximum of three pictures on top of the monument. It’s a rather busy tourist attraction, and there were a bunch of people in line, so the picture limit was very understandable. The monument itself is a disk with lines intersecting it to mark each state’s boundary. Within each quadrant is each state’s respective seal and name. I thought it was very well done, and I was happy that we finally got the equivalent of a “Welcome to New Mexico” picture with the bonus of including three other states! Not only that, but we managed to squeeze in a surprise twenty-eighth stop for this trip! 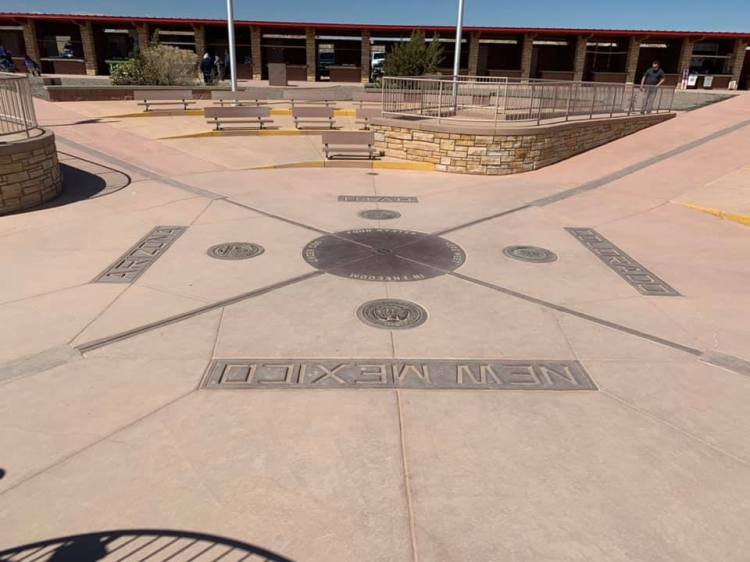 The monument has little booths surrounding it where some of the Navajo sell items like shot glasses, T-shirts, dream catchers, and handmade jewelry. My partner and I are in agreement that we don’t need to be buying a bunch of things on this trip. We’re moving across the country after this (Yes, we are essentially doing this trip twice in a row!), and we are tired of packing our worldly belongings! The memories and the pictures are all we need!

When we saw the little dream catcher, both my partner and I came to a sudden halt, both fixated on it at the exact same time. It was this little rainbow-colored dream catcher that was both a heart and a peace sign, and it really represents the essence of this trip quite perfectly. Our reaction upon seeing it must have been quite intense, because the woman manning the booth immediately jumped out of her chair! We both glanced at each other, nodded, and bought the dream catcher without further discussion. Come to find out, the woman’s eight-year-old son made it. It was the last of his that she had left, and the money is going to his field trip. We’re both utterly in love with it, so thank you to that little boy! 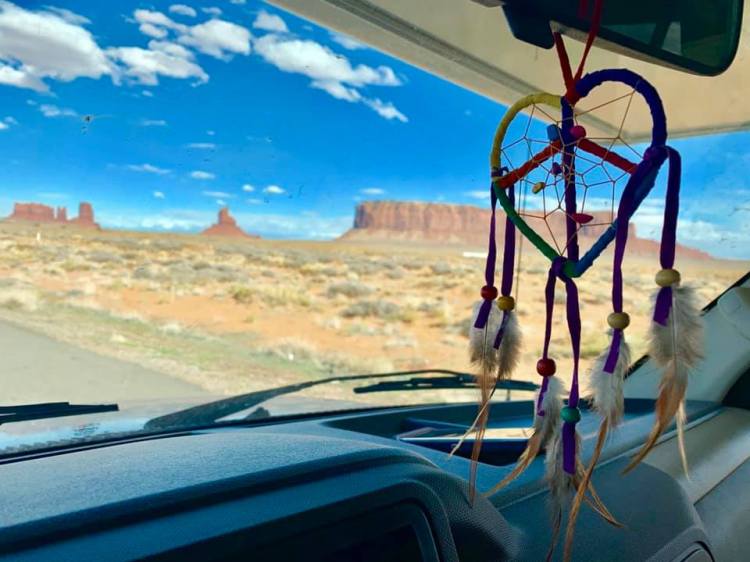 After that, it was time to try some Navajo food at Grandma’s Frybread Shack. We both got Navajo tacos, and we shared a frybread with powdered sugar and honey. All of it was amazing! I highly recommend you try the food at Grandma’s if you ever find yourself at the Four Corners Monument. 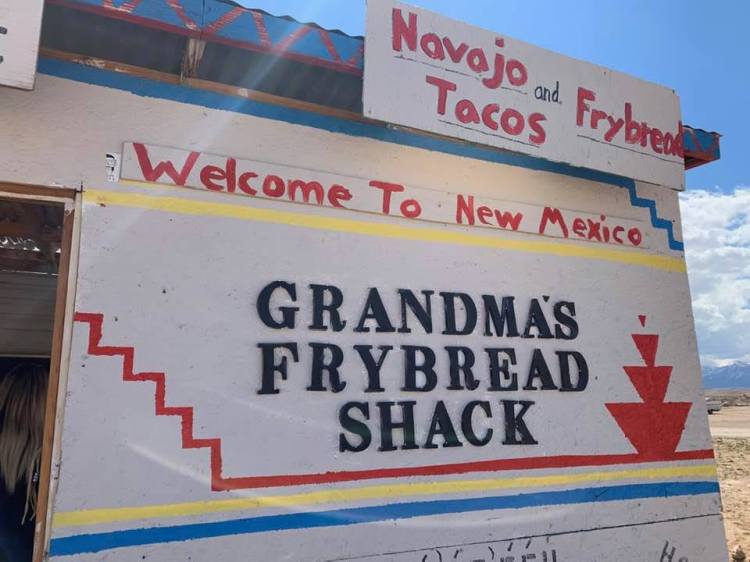 We left the Four Corners Monument, smiling at our little dream catcher, and I assumed that that was our unplanned adventure for the day.

I’ve come to accept that we’ll have at least one unexpected thing happen to us each day. Our most amusing one of the day went something like this:

“Honey? Is that horse outside the fence?”

My partner sort of glanced to the side, focused instead on the road.

“I really think that horse is outside the fence …”

My partner finally glanced over and started to ask “What hor—” when I sat bolt upright in my seat and started shouting “HORSE!” as the palomino stepped into the freaking highway. I came up with a lot of expletives for that guy as he walked up the hill, rounded the guardrail, and started to step onto Highway 163 without a care in the world. I never in my entire life thought I’d almost run over a horse, but I guess there is a first time for everything.

The roads out here are really steep, and they go up and down a lot. We decided to venture into Monument Valley for just a bit before the sun set, and after we went down our first steep hill, we pulled over and stared up, wondering if we’d be able to go back up the hill. As a general rule, when we aren’t sure about something, we wait for another RV to do it. In this case, we watched a fifth wheel, two RVs, and a school bus race up that hill like it was nothing, so we decided we were overreacting. Better safe than sorry! (We promise we’re taking good care of the RV, North Atlanta RV Rentals!)

We ended up driving the entire twelve scenic miles of Monument Valley, pulling over at almost every paved turnout. I’m pretty sure everything got its picture taken at least once, and we have sunrise and sunset locations and ideas picked out for tomorrow! We ended up staying for sunset today, and it was gorgeous! 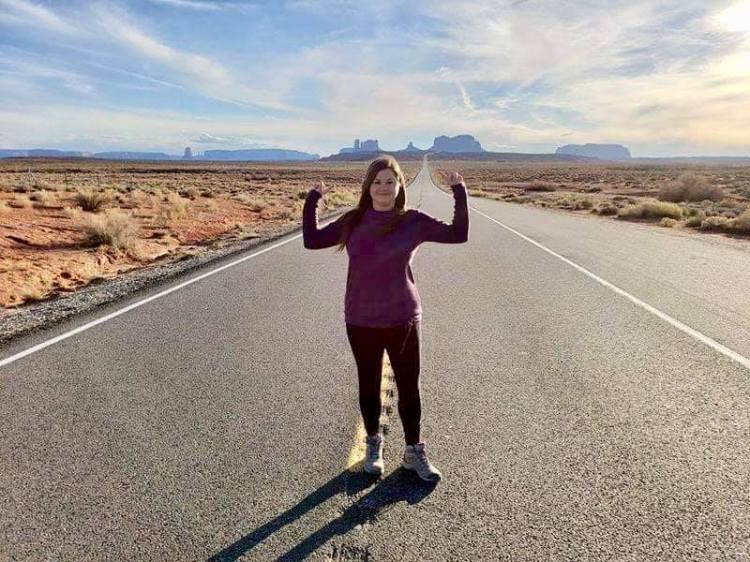 After that, we left for our RV park, Goulding’s. Goulding’s is undoubtedly our favorite RV park so far!  Goulding’s also has a lodge, a gas station, a restaurant, a laundromat, and a grocery store! We thought we hit the jackpot with just those things, but as we drove back to where the RV park is and the red rocks swallowed us, we realized that it gets even better. Not only are you inside the rocks, with the high walls surrounding you on all sides, but you can see the monuments, too! We love this place!

Tomorrow, we get up early for more exploring, and we can’t wait!

Alyse N. Steves received her Ph.D. in Genetics and Molecular Biology from Emory University. She is also graduate of Kennesaw State University, where she received a B.S. in Biotechnology. Alyse is a published author, with her first book making its debut in August 2016 (https://www.amazon.com/Child-Humanity-Alyse-N-Steves/dp/0997921412/ref=tmm_pap_swatch_0?_encoding=UTF8&qid=1550265008&sr=8-1). Outside of science and writing, Alyse is an avid traveler who also enjoys the company of her family, friends, and pets. View more posts

One thought on “Day #10 of the West Trip: Monument Valley is a unique treasure!”