We woke up at 6:30 a.m. I had the ungratifying responsibility of emptying our black water tank this morning, since I had no desire to do it in the dark last night. Unfortunately, Boot Hill’s quiet hours don’t end until 7:00 a.m., so we busied ourselves with breakfast until I was able to make noise outside. Once 7:00 a.m. rolled around, things went smoothly – I filled the clean water tank and emptied both the gray and black water tanks—until it was time to disconnect the sewer line. There’s this little piece that screws onto the RV park’s sewer connection to connect our hose, and I could not get it off. We started to panic after about ten minutes. We put butter on this thing. We poured hot water on it. The dang thing would not come loose!

“Is there a trick to this that I’m missing?” I asked, hoping that he’d get curious and want to help. Like I said, Bill was nice, so he immediately grinned at the two city girls in distress and said “I’ve got just the tool for that!” as he rummaged around in his pickup truck. This guy was a pro RVer.

He wandered over with a wrench of some kind, grabbed our little plastic piece, and pulled hard …

And it didn’t budge.

After two or three minutes, he stood up and stared at me like he was looking at the newest member of the Avengers.

“I’ve never had this happen,” he said, staring at me and wondering where the heck I was hiding the muscles that somehow managed to fuse our little plastic piece to the RV park’s sewer line.

In the end, we had to leave our little plastic piece behind, but Bill, our knight with a shiny white pickup truck, gave us one of his. Thank goodness. We did NOT have time for unplanned stops today.

We left just past 8:00 a.m., almost an hour later than I had planned. It stressed me out a bit, since we had to drive nearly four hours to Kasha-Katuwe Tent Rocks National Monument, and it was our only day there.

But the drive! Oh, my goodness! New Mexico is beautiful! I keep thinking I’ve seen the most beautiful mountain ranges I’ve ever seen, and then we keep driving. I was exhausted waking up this morning after our complete butt-kicking by White Sands yesterday, but I listened to my audiobook and watched the mountains rise before us, and I was so excited that I forgot that I needed about two more hours sleep to be considered human again. Unlike the Texas mountains, which we zigzagged through, New Mexico’s roads go up and down over and over again (We’ve climbed 4,000 feet since we left Atlanta!). My ears kept popping all day, but the RV does better with steep inclines than sharp curves, so the drive was more relaxing than when we left Big Bend.

We got to Tent Rocks around 1:00 p.m. after a beautiful drive through the Pueblo de Cochiti Reservation. Like our drive to Big Bend, the closer we got to the park, the more it felt like humanity had been erased from existence. In some ways, the area around the Tent Rocks felt more remote than getting to Big Bend, and that’s saying something! We got to drive over the Rio Grande, which thrilled me half to death, since we never actually got to see it in Big Bend. When we reached the monument’s entrance, I grew nervous that I had planned this particular stop way too poorly. Unlike the other parks, Tent Rocks closes at 4:00 p.m. We only had three hours to explore, and that made my skin crawl with irritation. 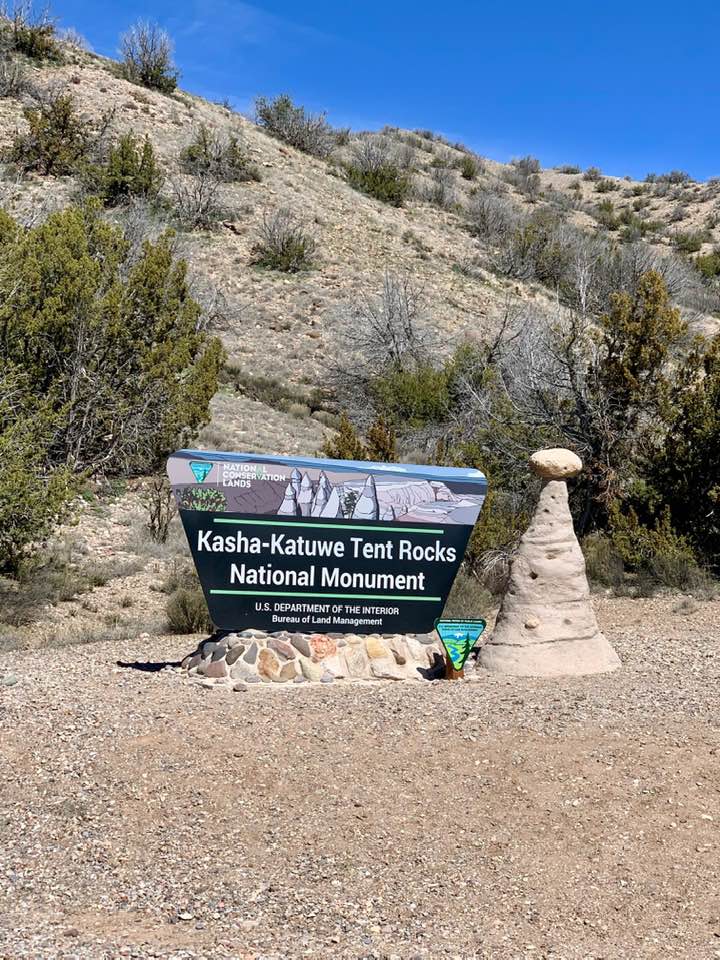 Turns out, we really only needed two, though we took the extra hour because we were taking photos. Tent Rocks is actually a very small park. It had one loop that was fully accessible to us, and it was a little over a mile. We could only go a few hundred feet on the second trail. Turns out, when the government shut down, there was no one to maintain the trails. Well, fifteen feet of snow fell into this canyon trail during that time, making it dangerous and impassible. Two months later, and people still can’t get back there!

The trails themselves were gorgeous. The first trail we went on was a perfect loop, and we got views of the tent rocks from all sides, as well as a cave that was hand dug into the side of the mountain by humans nearly 1,000 years ago. The mind-blowing thing is that you can still see the marks from the fires they lit on the ceiling! 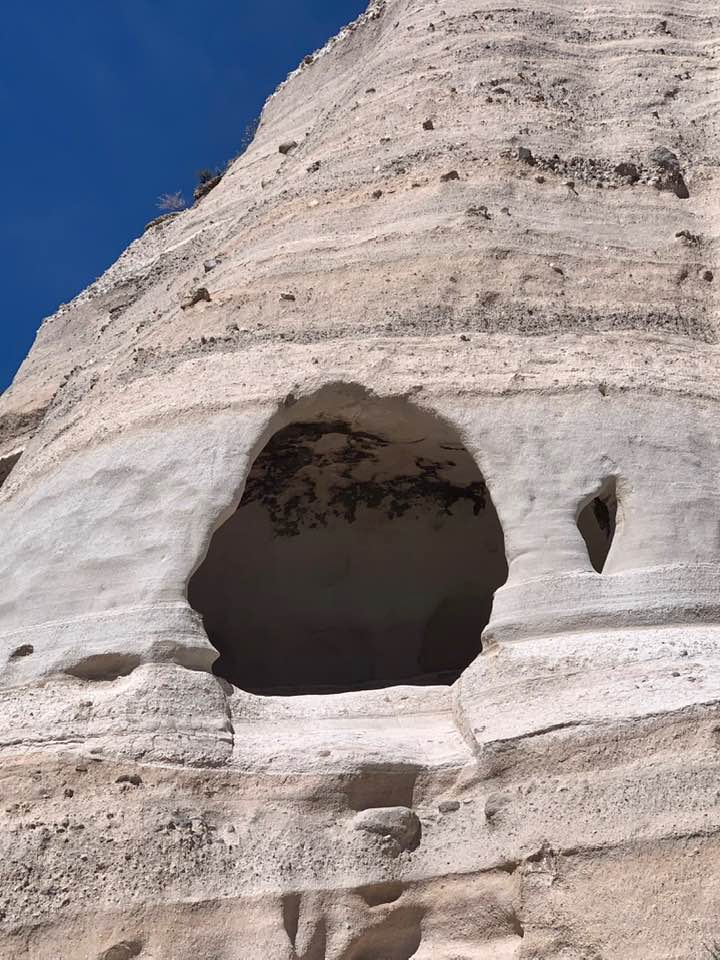 Besides the lovely Tent Rocks, the trail did offer a few extra surprises. My grandmother has a wild spirit and used to frequent the West. Before we left for this trip, she told us she was glad we weren’t going to New Mexico in the summer, since the state is crawling with rattlesnakes then. As soon as we stepped on the trail, I saw the sign warning about snakes, urging us not to step off the marked path. This put me a little on edge, but it was in the low 50’s, so I didn’t expect to see a snake. I was right. No snakes. What I did not expect was the bees. My partner is deathly allergic to bees. We have to carry an EpiPen on our walks, just in case.

Guess who the bees just loved?

I know enough from living in Florida as a child that you don’t swat bees. It just makes them mad, and mad bees sting.

So I kept it myself that my partner had bees sitting on her back while she was snapping photos.

Am I a bad partner? Maybe. Did we have to use the EpiPen? No.

We almost didn’t go on the second trail, since it was closed after a few hundred feet, but I’m so glad that we did! The second trail included a canyon, which sometimes becomes a river when it rains. There were rocks along the trail that hadn’t been there last week because of a flash flood, the ranger at the end of the trail told us. The partially open trail had beautiful, swooping high walls that occasionally boast a tent rock or two. We only got to walk a little bit of it, but the parts we got to explore were incredibly fun. The trail has the word “Canyon” in the name for a reason. We got to crawl through two canyons on our way back, which is an interesting experience with photography equipment on your back. The trail gets so narrow at some points that we only got through by putting one foot on the trail, one foot on a wall, bracing ourselves against another wall, and basically shimmying through. There is also this gorgeous pine tree the seems to stand on its tiptoes, standing high off the ground by a set of gnarled roots. Turns out, her name is Eleanor. A very chatty, personable park ranger told as this as he walked beside us, also mumbling about how the tourists need to stay on the trails and stop climbing on things.

Have I mentioned how much we love park rangers?

We absolutely want to go back to explore that trail when it is fully open, and if you ever get a chance to visit Tent Rocks, don’t miss it! It’s so beautiful! 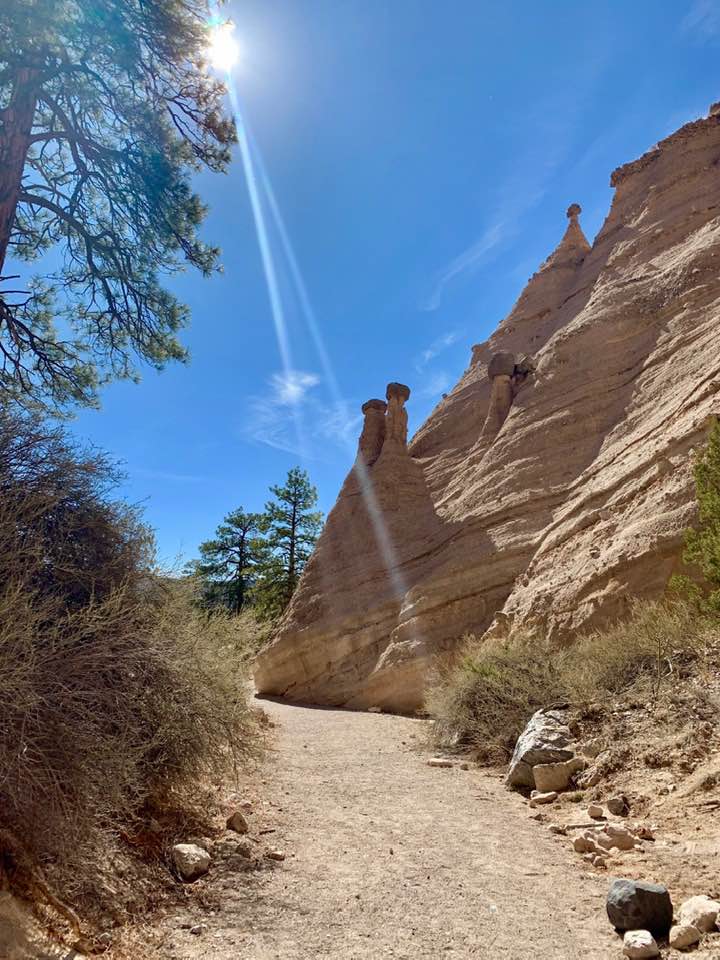 We left promptly at 4:00 p.m. as the park rangers were chasing people out. From there, it was a beautiful drive through the Pueblo de Cochiti Reservation lands toward Santa Fe, and we arrived at Piñon RV Park just before 5:00 p.m. Because of how far the reservation lands stretch, there really isn’t anything closer.

We settled in and had dinner. And by that, I mean we were so tired and hungry that I made dinner twice. After dinner, I started to settle back and relax. We had survived the sewer line drama this morning, made it to Tent Rocks, and had managed to see every part of the park that was accessible to us!

But that’s when the next drama of the day started. Turns out, RV park Wi-Fi is really, really bad. As a professional photographer, my partner has taken A LOT of photos and videos, and all of those photos and videos need to be backed up. Well, with the RV park Wi-Fi, it would take thirteen days to download them to Dropbox. Thirteen days does not work for us. So, what did we do? We piled into a Lyft with our computers (As my partner muttered “You do realize this is how we get murdered, right?”, and a very sweet girl, who also happens to be moving to San Diego, drove us to Starbucks. So, as I type this, I’m seeing civilization for the first time in over a week, munching on a sugar cookie, and my partner’s images should be done downloading in two hours.

This concludes stop #3 at Tent Rocks. Tomorrow is stop #4 at the Bisti Badlands in the De-Na-Zin Wilderness!

Alyse N. Steves received her Ph.D. in Genetics and Molecular Biology from Emory University. She is also graduate of Kennesaw State University, where she received a B.S. in Biotechnology. Alyse is a published author, with her first book making its debut in August 2016 (https://www.amazon.com/Child-Humanity-Alyse-N-Steves/dp/0997921412/ref=tmm_pap_swatch_0?_encoding=UTF8&qid=1550265008&sr=8-1). Outside of science and writing, Alyse is an avid traveler who also enjoys the company of her family, friends, and pets. View more posts